Driving up the Pacific Coast Highway past Newport and Huntington Beach at this time of year should offer beautiful scenery, pristine beaches, and blue waters. However, when Melissa and Joana drove up in early October, tarballs dotting the sand, oil slicks a few feet from shore, and dizzying smells were what was left of the coastal paradise. This is because of the unforeseen Orange County oil spill threatening Southern California’s Coast—both its pacific vistas and its ecological health.

In fact, the origin of the oil spill is rooted in oil infrastructure dating to the 1920s. During the period’s oil boom, Huntington Beach and surrounding areas invested enormously into the oil industry. If Melissa or Joana drove up the PCH1 then, on both sides of the highway would be a battalion of oil rigs. Nowadays, the same borders of Huntington Beach and PCH1 are sandy beaches and pricey homes. However, the occasional oil rig and pumping jack are vestiges of this oil-hungry past for Huntington Beach—and greater Southern California.

Huntington Beach’s high school mascot even became the ‘Oilers,’ a living remnant of what should be the bygone era of So. Cal.’s oil craze. The antiquated industry and its equipment, however, still linger and are used to this day. This is how the Orange County oil spill on October 1st, 2021 occurred when an undersea pipeline burst and gallons of oil started leaking into the Pacific.

“As oil infrastructure continues to age, more maintenance is required to prevent these accidents from happening,” say Melissa and Joana.

These accidents are what led to the ambitious efforts of the two graduate students to understand the coast’s microbial response. Completing sampling trips to Newport Pier three times a week, Melissa and Joana are able to analyze the contents of the water and its microorganisms. They are testing the composition of bacteria and phytoplankton by comparing samples collected before, during, and eventually after the oil spill has run its course. From there, they can see trends in the abundance of specific microorganisms and learn how they react to the influx of oil in their environment. 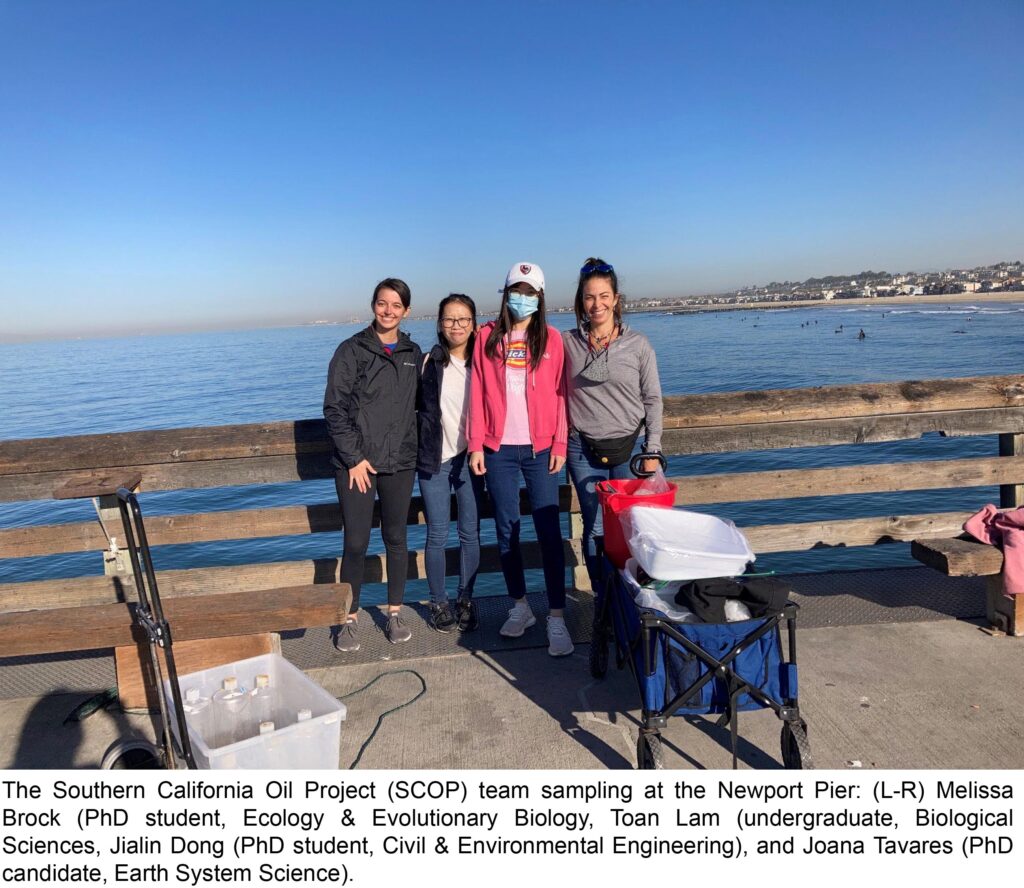 Melissa and Joana have organized this collaborative effort in response to the oil spill in the past month. Their interdisciplinary research project involves resources, students, and professors from multiple UC universities. The project itself was founded by the unlikely duo who found out their two subjects were compatible. Melissa had been working on several projects related to bacterial diversity in oceans for a while. In fact, she is a part of the Newport time series, an ongoing effort of 10 years to analyze the natural variability of the local bacterial communities right off the pier. Joana’s graduate work, on the other hand, has involved understanding how a ship’s smokestack emissions affect marine phytoplankton. The fuels combusted in a ship’s engines expel soot and gases, creating an environmentally hazardous plume. Its chemicals and trace metals would alter the content and types of nearby phytoplankton communities. Because of Melissa and Joana’s interests in sampling microorganisms and understanding pollutants’ effects on their communities, they were perfect for leading the research project on the recent oil spill.

“We are very excited! Our professors have given us the wonderful opportunity of forming SCOP and leading this project,” says the two.

SCOP includes research based in Prof. Katherine Mackey’s group in the Department of Earth System Science (ESS), Prof. Adam Martiny’s laboratory, in the Department of Ecology and Evolutionary Biology and ESS, and Prof. Chris Olivares, in the Dept of Environmental and Civil Engineering at UCI. Moreover, oil spill plume maps generated by UCI’s Coastal Dynamics Laboratory, headed by Prof. Kristin Davis, help understand how the plume is moving in relation to the shoreline. The specific sampling locations, however, are determined by the existing time series from the Martiny Lab. Researchers from other UC schools, such as Prof. David Valentine at UCSB, who helps with the oil forensics side of the project, are involved as well.

Between the oil spill, graduate work, and the newly organized SCOP, Melissa and Joana have their hands full. Regardless, the two have always had a strong sense of what science means to them: “Science plays many roles in society. Its primary goal is to help us understand the world around us better.” The project has shown them just how complex the ocean’s microbial community is and how receptive it can be to these ecological mishaps. Nevertheless, it is difficult for them to have a say on a city’s or industry’s reliance on oil despite their scientific research. Although the project will reveal the “hidden and perhaps lingering consequences” of the oil industry on Southern California’s environment and people, they are what “economists call externalities,” says the two. Secondary to the daily convenience of oil, its industrial roots, and its capitalist drive lies the area of their research—an area where the voice of science can only reach so far.

The SCOP involves and advocates for undergraduate students to be involved in research, spreading the project’s importance across academic generations. The Martiny Lab already has several undergraduate researchers working on a variety of areas associated with the project. For instance, some of them are “being trained to extract bacterial DNA as well as perform geochemical analysis for carbon, nitrogen, and phosphorus,” say the two. Melissa and Joana are very passionate about this side of the project and truly believe that the undergraduate effort has been essential for SCOP to thrive.

Melissa and Joana’s recent success reveals only one aspect of a larger movement. Aside from the SCOP, a part of UCI’s larger student body is making its own efforts to fight against Big Oil and fossil fuels, advocating for solar power instead. Student volunteers from UCI’s CALPIRG (California-based Public Research Group) are making rounds around UCI’s ring road spreading awareness on the ongoing battle against non-renewable energy sources and asking students to sign petitions.

Diverse efforts from Melissa and Joana, SCOP, CALPIRG, and ambitious undergraduate researchers have put UCI on the scientific and socio-political map as major defenders of Southern California’s coastal environments. These smaller movements raise a voice that might finally free Southern California from the lingering risks of oil’s antiquated era.